The origin of the first plants

2 - In praise of diversity

3 - The role of agriculture in all this

The appearance of the first plants on Earth is a story of symbiosis between plants and microorganisms. It has now been established that the first plants, which at that time lived exclusively in the oceans, were able to colonize the land environment thanks to their symbiotic association with fungi. These associations gave rise to the first symbioses, which are known as mycorrhizae (plant/fungus association). They date back more than 450 million years Strullu (1985); Smith & Read (2008).

But the story does not end with the mycorrhizae. Bacteria, yeasts and fungi were already present on land when the plants began to grow there, and their histories became closely entwined ever since. This microbial colonization is so ancient and widespread that microorganisms are involved in many of plants’ day-to-day mechanisms, such as nutrition, growth or immunity, for example.

In agriculture, microorganisms have long been seen purely as pathogens. This negative vision has now become outdated and by studying microbial communities associated with plants we have been able to demonstrate how many microorganisms could be helpful for agriculture. They can be found in the rhizosphere (area near the roots) and the phyllosphere (the parts of the plant above ground level), and some also colonize the inside of their host; these are known as endophytes.

Rhizosphere microorganisms interact with the plant through its roots.

Rhizosphere microorganisms interact with the plant through its roots. 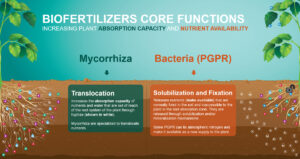 That is where we find the richest microbial flora, and here we can draw a parallel with the human intestine, which is teeming with flora that is as essential as it is fascinating. Roots act like an inverted intestine, with absorbent hairs that are surrounded by large microbial colonies. The roots release exudates specifically to attract and stimulate these microorganisms that are beneficial to the plant. For example, certain bacteria stimulate and/or protect the plant with one or several different mechanisms: excretion of phytohormones in the surrounding area, solubilization of minerals caught in the soil, atmospheric nitrogen fixation, reduction of the number of certain pathogens in the soil (due to competition or hyperparasitism, etc.). These bacteria are known as PGPR (Plant Growth Promoting Rhizobacteria). It is also in this same environment that we will find mycorrhizal fungi and other yeasts.

The phyllosphere and the endosphere are also home to a diverse range of microflora that are involved in mechanisms for providing nutrition to plants or for protecting them from abiotic and/or biotic stress, like natural defense stimulators (NDS).

Microorganisms are not active agents or fertilizers in the true sense of the word, but they work as partners to plants, which form complex relationships with them, going far beyond the function for which they are selected. With a diverse range of microbial life, a plant is able to form its own veritable ecosystem, and we now know that the more complex this ecosystem is, the more chance the plant has of combating external threats.

2 - In praise of diversity

While it may be stable in appearance, we know that an ecosystem never stops evolving, and it is capable of adapting to changes in its biotope.

An excellent example of this was demonstrated through recent research on the evolution of the biotope on the shores of Lake Miroir, in the village of Ceillac in the French Alps, with an analysis that goes back beyond the last glaciation. This study shows how, against all expectations, superior plants have been able to survive through the most extreme climate changes – the writer speaks of an oasis of life frozen in time and space – thanks to interdependence and interactions with a huge range of different organisms living in the same biotope.

This research was published in 2017 in New Phytologist and in 2018 in Global Change Biology.

“All this evidence supports the original idea that trees and other organisms may have survived the glaciation in oases of life or refuges close to glaciers, forming microecosystems that are small but have survived over the millennia thanks to the extraordinary resistance and resilience properties of the organisms and their interactions. These oases sometimes perched on mountains emerging from glaciers are called nunataks, a term derived from the language of the Inuit of Greenland.”

While this resilience sheds some light on the importance of diversity, we probably still only understand a small amount of it today.

3 - The role of agriculture in all this

By forming new biological environments with homogeneous living conditions and biotopes, agriculture has disrupted all of the pre-existing balances. This is almost instantaneous in terms of the amount of time it takes to establish a stable ecosystem (a minimum of 50 years, according to the French Institute for Sustainable Development), incomparable to the amount of time required to establish a symbiosis or a mutualism by coevolution, which takes several thousands of years! Within this context, it is hardly likely that agricultural plants will be able to naturally recreate an optimal microbial ecosystem.

The key strategy developed by Lallemand Plant Care is to carry out research in order to propose microorganisms that would be beneficial for plants. Thanks to our various partnerships throughout the world, we study the underlying mechanisms behind the interactions with microorganisms and select the strains that would be of most interest to agriculture. Our objective is to “complete” certain functions of the plant through its association with key microorganisms in the realm of nutrition and resistance to abiotic and biotic stress. This leads us to select, produce, develop, test and approve microorganisms that will artificially inoculate plants.

By combining two different types of genetics within the field, we aim to create a new hybrid organism (plant/microorganisms), which we hope will produce a heterosis effect!

Beyond the potential inoculations, we believe that rotations or successions of plants on a plot of land should be considered as a variable ecosystem at an annual or multiannual level, but consistent over a longer period, and it is from this perspective that we can envisage durable and profitable effects from our plant/microorganism associations. This is one of the points that fundamentally differentiates the use of microorganisms in agriculture from the use of traditional inputs.

This approach will only be of value from an economic and technical standpoint if it is integrated into fertilization (mineral and organic), crop rotation, tillage, etc., in order to better express the genetic potential of plants and their associated microorganisms.

Despite the symbiotic (or mutualistic) relationships between plants and microorganisms having existed for over 450 million years, mankind has barely scratched the surface of its potential. In his book Never Alone, published in 2017, Marc-André Selosse, a professor at the National Natural History Museum in France, writes that “the concept of an organism, where a plant is an entity in itself, has been very useful throughout the history of science: it was the foundation for our vision of physiology, and indeed many medical and agricultural applications resulted from this. But it is now an outdated approach to limit yourself to the concept of an organism and expand from there. Our macroscopic vision has forged how we view the world, but we now have the means to look at it from a different perspective”.

Increase your yields
Know your basics

How manage invasive buckthorn in urban and rural forests

Plants, animals, insects, pathogens... Invasive species are a global issue and cause negative impacts to the environment, economy, and/or society. In...