All you need to know about sulfur in agriculture

1 - Do you know the different forms of sulfur ?

4 - What do crops need and what risks are there in case of deficiency?

5 - Is providing sulfur with immediate effect a good solution?

Essential for protein synthesis, sulfur is necessary for the vital needs of plants throughout their cycle, including for building up seed reserves.

But in its most common organic form, it cannot be assimilated by plants.

The organic sulfur will therefore have to be transformed by soil microorganisms, oxidative sulfur bacteria such as thiobacilli. They will transform it into sulphate, its ionic form, which can be assimilated by plants.

1 - Do you know the different forms of sulfur ?

SO2, H2S, SO4, S2O2, or S, sulfur occurs in many forms in nature. Present in the atmosphere in the form of sulfur dioxide SO2 and hydrogen sulfide H2S in rainwater, it is found mainly in organic form in crop residues, animal effluents and soil.

⬇ This diagram presents sulfur cycle in a simple way ⬇.

As a component of many amino acids, sulfur is an essential element in the synthesis of proteins.

It is therefore essential to the vital needs of plants throughout their cycle, including building up seed reserves.

But it also intervenes in many mechanisms. It is, for example, necessary for the formation of chlorophyll and therefore plays a role in photosynthesis. It is also essential for the proper functioning of the nodules that allow legumes to fix nitrogen symbiotically. 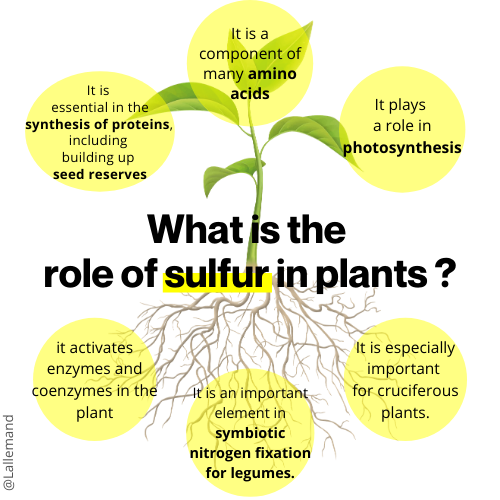 But, just like nitrates (the assimilable form of nitrogen), sulfates are very sensitive to leaching.

In cold weather, when there is an excess of water, acid soils or soils with a low level of organic matter, filtering superficial soils (such as sand, superficial clay-limestone, chalk) or even after winter leaching, as soon as the mineralization of the soil is low the risk of sulfur deficiency is important.

Moreover, sulfur inputs from atmospheric fallout have been falling steadily for 40 years – which is not a bad thing, but it is worth taking into consideration. Generally speaking, soils today receive seven times less sulfur than they did 30 years ago (more info in this paper).

4 - What do crops need and what risks are there in case of deficiency?

Canola is the most sulfur demanding crop and a severe deficiency can cause production falls of 1340 lb to 1785 lb/ac(20 to 40% of the yield). Along with fodder crops or legumes (mustard, alfalfa, clover, grass) cabbage, onion and garlic, it remains one of the crops with the highest sulfur requirements, and within a very specific time frame: from the beginning of the run size. However, many farmers are “ignoring” sulfur (in its mineral form), even though it is systematically recommended every year. (Terres Inovia -the French technical institute for oil and protein crops and hemp-survey of 2008).

Sulfur-deficient cereals lose both the number of ears and fertility

For cereals, a deficiency leads to a decrease in the number of ears per square meter and in their fertility. The result: “Losses range from 180 lb to more than 900 lb /ac in most cases and up to 1800 lb /ac for major deficiencies,” says Arvalis.

Corn, beets and potatoes require sulfur at a later stage

Corn, beet and potato crops have needs equivalent to wheat, but at later stage. These needs are therefore often satisfied by the mineralization of organic matter present in the soil. However, pre-planting inputs can also provide yield gains on these crops, especially in filter or low organic matter soils.

5 - Is providing sulfur with immediate effect a good solution?

The spreading of form-releasing, “immediate-effect” sulfur fertilizer may be preferable. Field crops such as rapeseed, straw cereal, beet, potatoes, and also leguminous plants respond favorably to this type of input: ammonium sulphate, potassium sulphate, superphosphates, nitrogenous sulfur solution, and kieserite, many forms of sulfur fertilizers are currently available on the market.

Beware, however, the intake of sulfur in the S form is expensive and its direct nutritional action is weak.

In case of deficiency, Arvalis (an applied agricultural research organization in France) also advises against the application of wettable sulfur like Thiovit: a little slow to act on established deficiencies.

Manure and other organic amendments are another possible form of sulfur input. This type of fertilizer allows a slower assimilation of sulfur. Depending on the animal origin, manure can contain between 1 and 3 lb of sulfur per long ton.

Poultry effluents are the richest in sulfur (and nitrogen).

For cereals, the use of sulfur is useless in plots that have been receiving regular manure inputs for more than 20 years except, in the spring in case of very rainy winters and in high-risk soils, advises Arvalis.

Sulfur is not always present in sufficient quantities for highly productive crops, warns the fertilization department of the Ontario Ministry of Agriculture (Canada). However, the effect of commercial sources of sulfur on crops is less pronounced when manure is applied on a regular basis.

The SO4 are very sensitive to leaching. Losses are significant when rainfall from mid-autumn to mid-winter is greater than 350 mm (14 in).

Sclerotinia, also known as “white mold” is a serious disease that affects a great number of crops (most broadleaf crops are susceptible to it). ...