1 - The multiple benefits of crops rotations

2 - Biological Nitrogen Fixation
what is it?

3 - The importance of rhizobium inoculants in legume cultivation

4 - Different types of legumes and their nitrogen fixation rates

5 - How to decide the right crop cover mix?

Agricultural and farming activities involve several complex interactions between the ecosystem (including abiotic and biotic factors) and the type and level of intensity of the production systems which are carried out. Productivity and economic outcomes will depend on many variables, some of which are commonly measured to calculate the economic benefit of the business in each season.

But, apart from the quantity and quality of the desired goods obtained (grains, milk, meat, fibers, etc.), the agriculture and farming techniques will have a great impact on other aspects of the system, such as soil properties (nutrient levels, pH, physical structure) and characteristics of the microbial, insect and vegetal communities in the general environment of the production field.

Although awareness has certainly grown, there is still difficulty to monitor some of these changes appropriately in each production system. In this sense, the correct implementation of validated agronomical practices and farming technologies is crucial in order to produce the desired goods, at appropriate levels, with environmental sustainability. 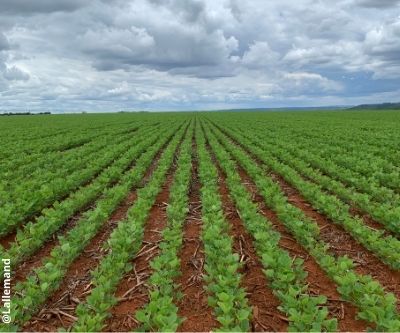 1 - The multiple benefits of crops rotations

Crops rotations are not solely intended to diversify production and reduce the commercialization risks (due to possible diminished demand and low prices of certain goods).

There are several benefits that arise from a correctly designed crops rotation, which means an appropriate combination of crops growing during the same season (at a farm and regional level) and a correct succession of crops over the different seasons. The main advantages have to do with a:

✅ reduction in the negative impact over certain soil properties and erosion

✅ and improved rainfall and sunlight use efficiency.

Depending on the type of crops rotations which is designed, there may also be a great benefit in terms of 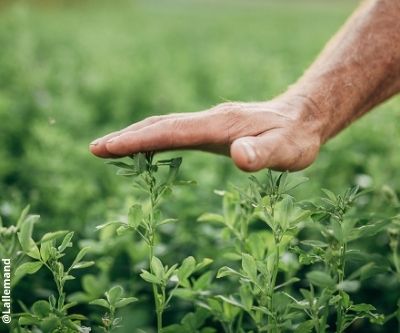 2 - Biological Nitrogen Fixation
what is it?

The atmosphere is an enormous reservoir of nitrogen (78 % of the atmosphere is nitrogen) but since it is under the form of N2, triple bonded, plants are unable to make use of it directly. However, a few genera of microorganisms on the planet (most of which are categorized as rhizobia spp.) can utilize atmospheric nitrogen and transform it into chemical compounds that plants may absorb and use.

This is what we call Biological Nitrogen Fixation (BNF).

The BNF process takes place in several ecosystems where legume species and specific rhizobia (gram negative soil bacteria from the genera Rhizobium, Bradyrhizobium, Sinorhizobium, Mesorhizobium and others) may associate in a symbiosis which enables these bacteria to fix atmospheric nitrogen into forms that are usable by the legume plants for their metabolism. The specific symbiosis between a certain legume species and its corresponding rhizobia species, enables the N fixation process to occur, which takes place in the root nodules, created as a result of proximity between the symbiont and the host plant.

This symbiosis is greatly specific, which means that each legume species can only establish a symbiosis with their specific rhizobia species. 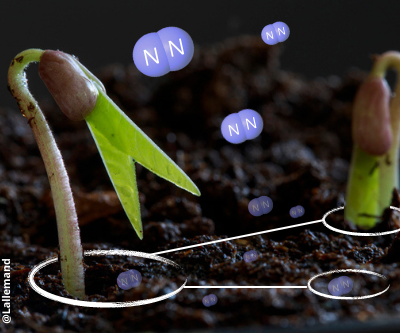 3 - The importance of rhizobium inoculants in legume cultivation

In natural, unaltered ecosystems, native legume species and their corresponding specific rhizobia species typically coexist, due to the natural evolution, and so, the nodulation and N fixation processes occur accordingly. 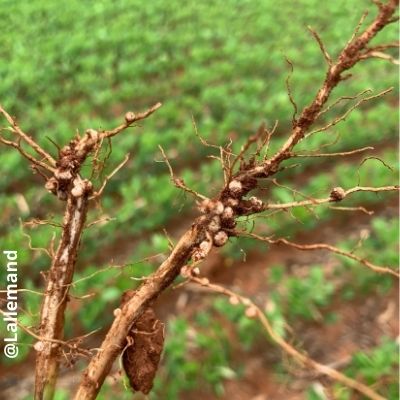 So, when sowing legume species, either for grain or forage purposes, the use of high-quality inoculants speeds up the introduction of specific and efficient rhizobial strains into the soil.

Placing the bacteria in the proximity of the roots – either applied on-seed or in-furrow – promotes early nodulation of the plant with the inoculated strains.

The inoculation technology has produced outstanding results in terms of forage and grain production in a wide range of cultivated legume species.

In most environments, it increases productivity without the need for chemical fertilization.

This highly recommended agronomical practice generates tremendous benefits for farmers, not only when the field has no previous history of that particular legume, but also when the soil may have background native or introduced populations of the specific rhizobia.

4 - Different types of legumes and their nitrogen fixation rates

The amounts of nitrogen fixed by well-inoculated and well-nodulated legumes will depend on the plant species and the characteristics of the soil and environment in which they are growing.

These typically obtain a significant proportion of their nitrogen needs from the associated rhizobia. The remainder is complemented through nitrogen uptake from the soil.

A high proportion of the total nitrogen ends up as protein in the grain and will be removed from the field ecosystem during the harvest.

However, high quantities of nitrogen will usually remain in the field as protein constituents of stems, leaves, roots and general stubble.

Then, the natural process of decomposition turns that nitrogen into part of the soil organic matter.

Later on, the mineralization processes will make the nitrogen available for subsequent crops in the rotation. 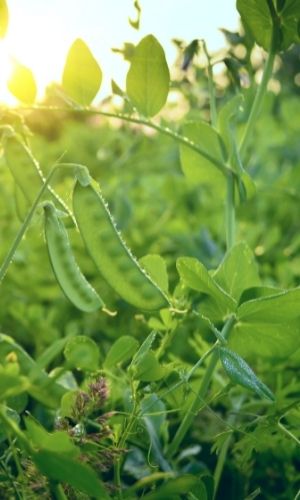 Nitrogen fixation rates will vary throughout the year, depending on the aerial biomass growth and the seasonality of the species.

For example, in temperate climates, BNF may reach levels of 30 to 35 Kg of nitrogen/ton of aerial dry matter/hectare/year.

Nevertheless, in perennial pastures, there are always significant amounts of senescent leaves and other organs incorporated into the soil.

These represent high nitrogen inputs that, after decomposition and mineralization, will benefit associated grasses in the pasture and increase nitrogen levels in the soil. 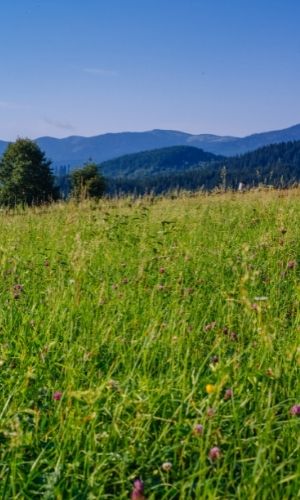 5 - How to decide the right crop cover mix?

In the case of legume species selected to be sown as cover crops, such as vetches and annual clovers, the nitrogen fixation levels which may be reached in short growing periods become an essential feature, highly desired.

Below is a representation of the plants commonly used in cover crops and their roots.

Click on the file to see a larger version.

By the end of a pasture or cover crop including legumes – which may be finalized by herbicide application or tillage – there is commonly an important amount of both aerial and underground biomass of high quality and low carbon/nitrogen ratio, which rapidly starts a decomposing process and gets incorporated into the soil system, contributing to an increase in the nitrogen levels.

Legume species incorporated into an agriculture or farming rotation will have a great impact in the production system, since they represent an excellent way of incorporating nitrogen to the system, due to the Biological Nitrogen Fixation which occurs when they grow in association to specific rhizobia bacteria.

This way of incorporating nitrogen to the system is very efficient and sustainable from an environmental perspective, and usually obtained at a much lower cost than chemical fertilization, so it, therefore, represents a great advantage of the inclusion of legume species into a rotation, either a rotation based only on grain crops or a rotation where grain crops are complemented with cover crops and pastures. 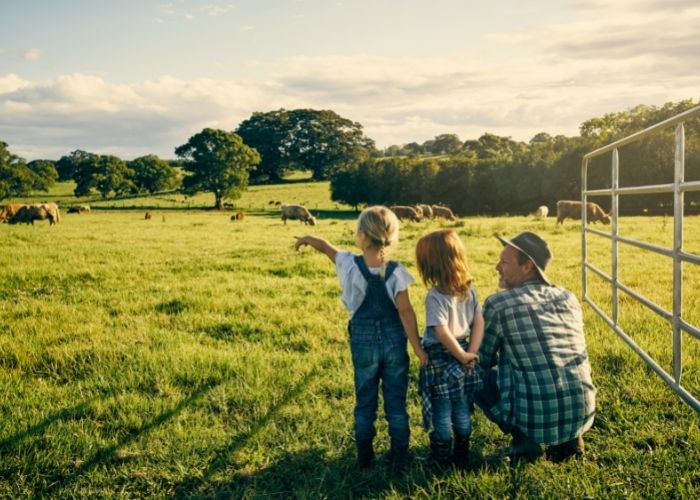 Increase your yields
Know your basics

While the production of nitrogenous fertilizers has significant environmental impacts, rhizobia are a precious tool. These bacteria, which live in sym...

Organic Matter: when and how to feed your fields’ soils

Organic matter provision, even though essential, often poses a conundrum for farmers. Here are four tips for assessing your soil's organic matter need...